Things You Should Know About Syrups Or Medicinal Syrups 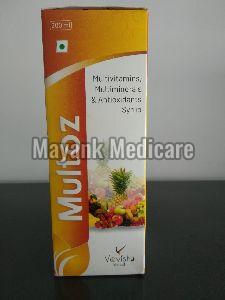 • It is easy to dispense degradable and unstable drugs in solution form or syrup form.

• The suspension is the only choice if the medicine is not soluble in water and the non-aqueous solvent is not acceptable.

• The drug in suspension shows a higher rate of bioavailability compared to the same drug of equivalent dose formulated in capsules or tablets. This is due to the larger surface area and high dissolution.

• Syrups are resistant to microbial growth.

• They help in soothing the irritated tissues of the throat.

• They disguised the bad taste of medication.


There are various medicinal syrups are available with syrup suppliers like as cough syrups, calcium syrups, iron syrups, syrups for digestion, anti-allergy syrup, anti-fever syrup and much more. You can also get these syrups from a syrup supplier in Rajkot at a competitive price. Some of the most popular pharmaceutical syrups are given in the list below. There are many medicines which are available in syrup forms-


• Cough Syrups: The cough syrups are the medications used to treat cough, stuffy nose symptoms and chest congestion caused by flu, common cold, allergies, hay fever or other breathing problems. Generally, cough syrups are the expectorants that help to thin and loosen mucus in the lungs and make it easier to cough out. These syrups also affect a certain part of the brain thereby reducing the urge to cough.

• Multivitamin Syrups: These syrups are used to treat or prevent vitamin deficiency due to poor diet, certain illnesses or during pregnancy. The vitamins are essential to build blocks of the body and help in keeping you in good health.

• Allergy Cold Syrups: These syrups are used to treat the allergy symptoms caused due to cold and flu.

• Digestive Syrups: These syrups are used to promote healthy digestion. The medications may promote a healthy metabolism. Customers can complement their daily diet with these digestion syrups to relieve digestive problems.


Syrups must be kept in tight containers and should be stored in a cool and dry place before and after use so as to preserve them.

This entry was posted on April, 27, 2020 at 12 : 24 pm and is filed under Syrup. You can follow any responses to this entry through the RSS 2.0 feed. You can leave a response from your own site.